The Chef Uniform: A Brief History

Parts of the Chef Uniform and their Functions

Where to Buy Chef Uniforms in Singapore

While few have earned the privilege of being called a chef, almost everyone who works in a commercial kitchen is required to wear either a chef coat or utility shirt.

The chef uniform is one of the most recognisable and ubiquitous around the world today, and for good reason: it serves multiple practical purposes and, like many uniforms, carries a good bit of symbolism.

The Chef Uniform: A Brief History

Way back during medieval times, cooks would simply wear an apron as an identifying marker of their profession. 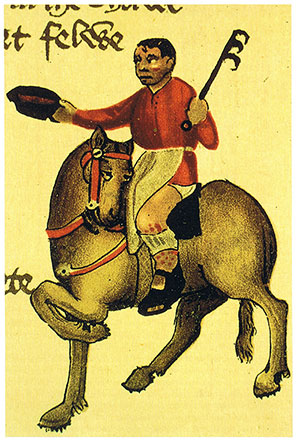 But chefs have long held an important role in ancient history.

In 7th century BC Assyria, the royal household would appoint only the most loyal subjects as chefs. Poisoning was a common method of assassination back then, so they wanted to make sure their enemies could not bribe the chefs to bring about their untimely demise.

In return, royal chefs were generously compensated and held in great esteem. They were also given the honour of wearing a hat similar to a crown -- albeit one made of cloth and lacking jewels. This is the same tall, pleated white hat we see on modern chefs today.

In 1822, the world saw the first sketch of the full chef uniform we know today. Drawn by the world’s first celebrity chef, Marie-Antoine Carême, the sketch depicts two chefs standing next to each other in their double-breasted chef coats, aprons, and white hats: 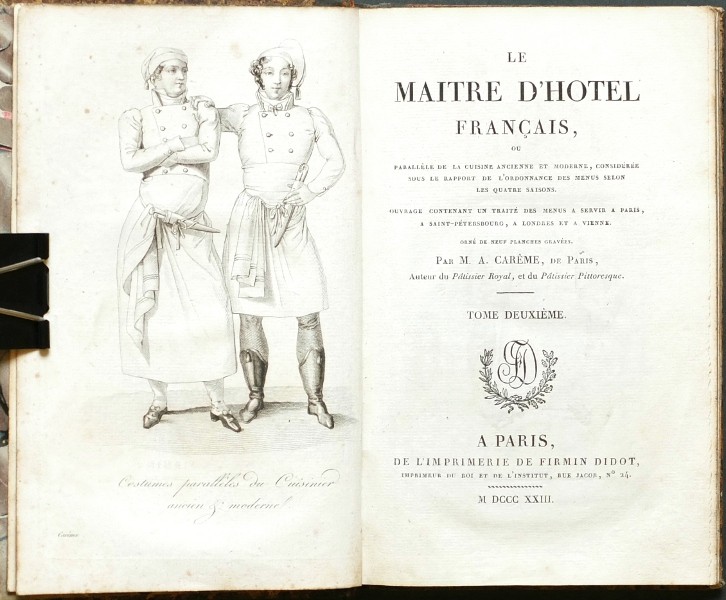 Later on in 1878, a uniform manufacturer picked up the design and started mass-producing it. Restaurants soon proceeded to standardise the uniform, requiring all of their chefs to wear it.

The specific design of the chef uniform today varies from place to place. Japanese sushi chefs, for instance, often wear a headband or skull cap instead of the pleated white hat. However, the modern chef uniform is still similar to Carême’s original sketch.

Parts of the Chef Uniform (and their Functions)

Versatile in its design, each part of the uniform serves a specific function in the kitchen:

1. Chef Jacket (or, the Double-Breasted Coat)

The chef’s jacket is usually white, which leaves patrons with an impression of cleanliness and authority (something you always want associated with a person handling your food!). White is also practical because of its ease of laundering using bleach and its ability to deflect heat.

Some dining establishments prefer black chef jackets because of the colour’s ability to hide stains. This is important particularly when chefs are working in open kitchens and subject to the diners’ curious gazes. 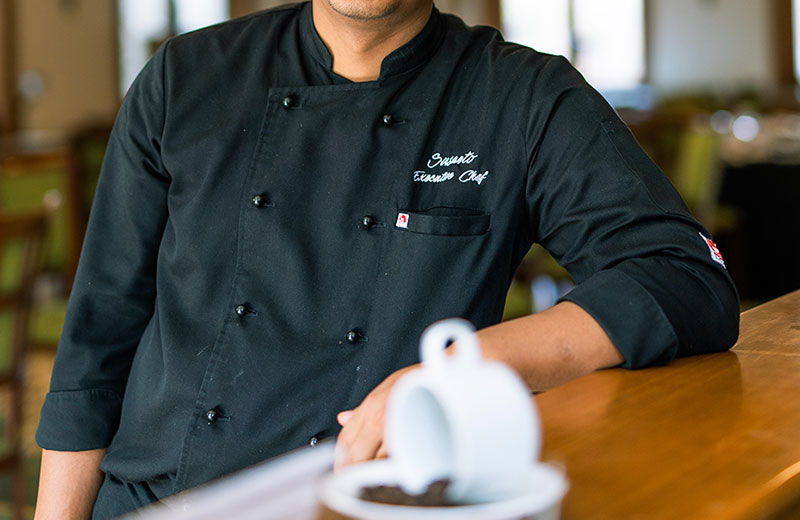 The double-breasted design of the chef coat is meant for added protection for the wearer’s chest and stomach area. It’s also reversible, making it easy for the chef to turn the jacket inside out and hide stains in a pinch. There are also single-breasted chef jackets available for those who don’t do much messy cooking.

Chef jackets often have long sleeves. These are to protect wearers working with hot stoves and ovens, but are optional for those primarily doing prep work. Some chefs go with long sleeves by default, then roll them up when the added protection is unnecessary.

Chef jackets are typically made of cotton or polycotton. 100% cotton or polycotton blends tend to be heavier. Thicker, heavier chef jackets provide better protection against scalding hot liquids and oil, but they’re also more stifling in the heat of a kitchen. Depending on your kitchen setup, you may prefer a lightweight chef coat or chef shirt instead.

If the breathability of the chef uniform is a concern, choose a chef jacket with added ventilation features such as:

Traditionally, chef pants are made slightly baggy both for ease of movement as well as better protection against hot spills (skinny jeans don’t leave a gap between your skin and the hot liquids).

Most chefs prefer pants with at least a few pockets for the various knickknacks they carry around.

The traditional design of chef pants includes a black-and-white houndstooth pattern (see below). This serves the very practical purpose of hiding stains and dirt. 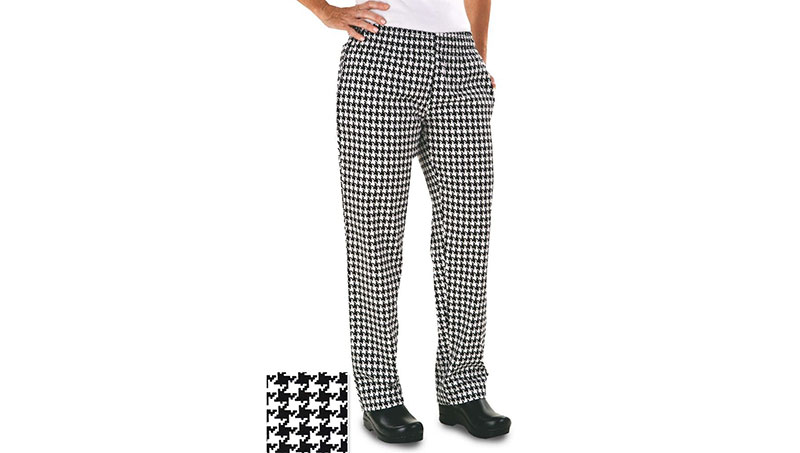 The chef’s hat is the most recognisable piece of his uniform. Not only does it make him easy to spot in a crowded kitchen, but the hat is a symbol of his or her experience and mastery:

This differs from restaurant to restaurant, and certainly there are many that choose to do without this symbolism. Often, Singapore restaurants will have only the head chef don a tall, pleated hat, with the others in the kitchen wearing a simple white skullcap or hairnet.

The chef hat is also functional, of course. It keeps hair out of food, absorbs a bit of sweat from the chef’s brow, and keeps the chef’s head cool with its puffy, airy design.

4. Apron and Side Towel

Many chefs also choose to wear a bib apron for more full-body coverage. This has a loop that goes over the neck and ties around the back of the waist. The bib apron usually has pockets, allowing chefs to carry utensils, thermometers, or other tools they need around the kitchen. 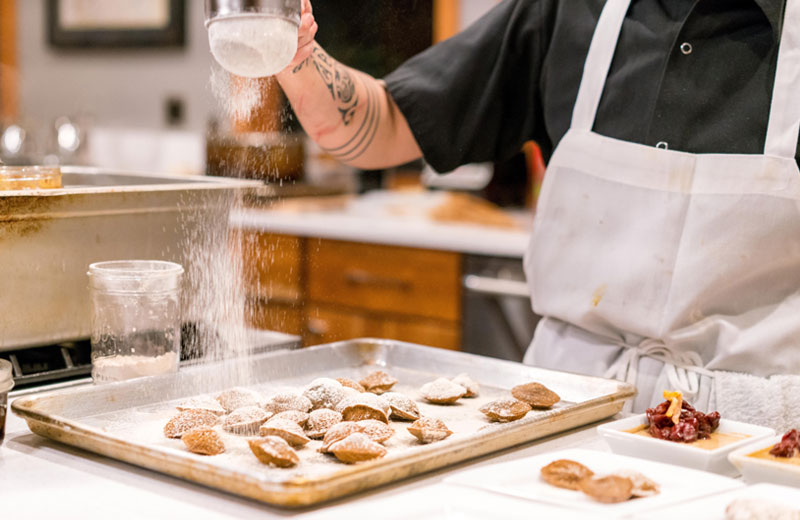 Sometimes, chefs will opt for a 4-way apron instead. This is a half-body waist apron with four layers, allowing its wearer to switch it around to a clean surface if the apron is stained. The benefit of a 4-way apron is that back-of-house staff won’t need to change their aprons quite as often, which cuts down on laundry costs.

Some chefs will hang a kitchen towel around the side of their apron, which they use to grab hot pans, dishes, and equipment on the fly.

Given that chefs are on their feet for many hours in the kitchen, comfortable non-skid shoes are a must-have. These should be closed-toed in the event of spills or an accident involving kitchen tools.

Crocs (or something similar to them) will fit the bill here, as the resin polymer material is sturdy and durable. If, for example, you happen to drop a knife on your foot, you’ll be glad to be wearing these! The shoes are also easy to clean and made of a non-slip material that gives good grip on most flooring.

Where to Buy Chef Uniforms in Singapore

Now that you’ve got a good grasp of each part of the chef uniform, where can you buy them? Here’s a quick rundown of the brands that sell chef uniforms in Singapore: 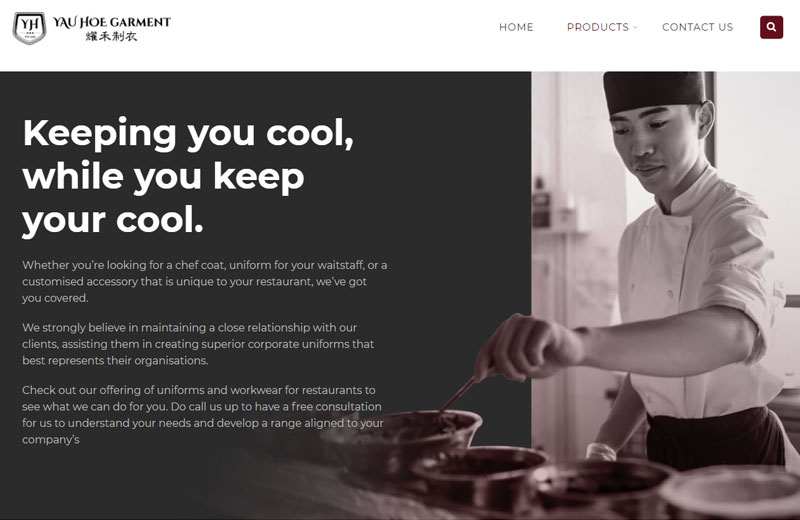 Now run by third-generation management, Yau Hoe Garment has been supplying corporate uniforms to the local scene for three decades. They have the full complement of F&B uniforms: chef coats and pants, chef hats, aprons, towels, and front-of-house waitstaff uniforms.

Through MerchFoundry, Yau Hoe Garment chef uniforms can be easily customised with print or embroidery. 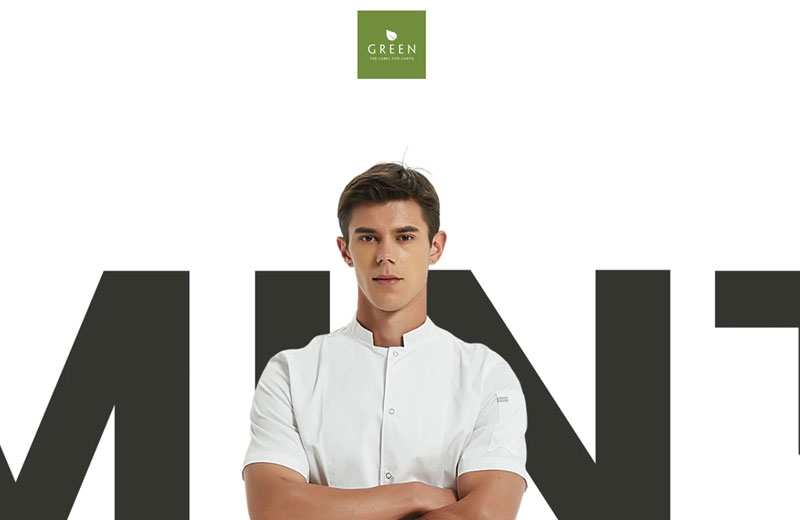 Since 2011, GreenChef has specialised in supplying uniforms to F&B businesses, hotel and resort establishments, independent chefs, and culinary students. They’re based locally but do not have a physical store: all purchases are entirely online through their website. GreenChef offers embroidery options with their uniforms. 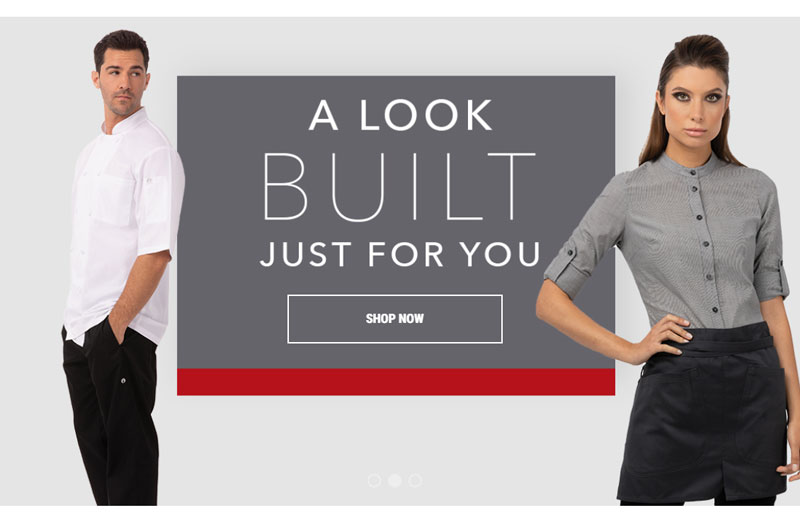 Chef Works is actually an American brand with a branch in Singapore. They have both an online store and a physical showroom, with the latter conveniently located at Temple Street.

Given that this is an imported brand, expect prices to be a fair bit higher than those of our local manufacturers. They do have a nice selection of F&B uniforms though!

This straightforwardly-named manufacturing company is what you’d expect of a Malaysian brand: they offer a convenient and wide selection of F&B uniforms at competitive prices. They mostly work with larger establishments, though they do have an online store for those wishing to place smaller orders.

CheckedOut has grown rapidly since its inception in 1994, now boasting five factories that produce 30,000 pieces of ready-to-wear uniforms annually. Embroidery options are available but at a MOQ of 100 pieces.

Mizbeth was originally founded by a woman, for women -- but has since evolved to cater to everyone.

The story begins when Jennifer Angela Lee, then a head chef in Singapore, found her chef uniform overly boxy and too hot to wear behind the stove. She started designing her own chef jackets, making sure they fit women well and adding a splash of colour to liven up the uniforms.

“I just wanted to create clothing for the kitchen that was both fashionable and most importantly, functional and comfortable,” said Angela.

Their online store is still a work in progress. It only offers aprons at the moment, as Mizbeth has been focused on custom orders. 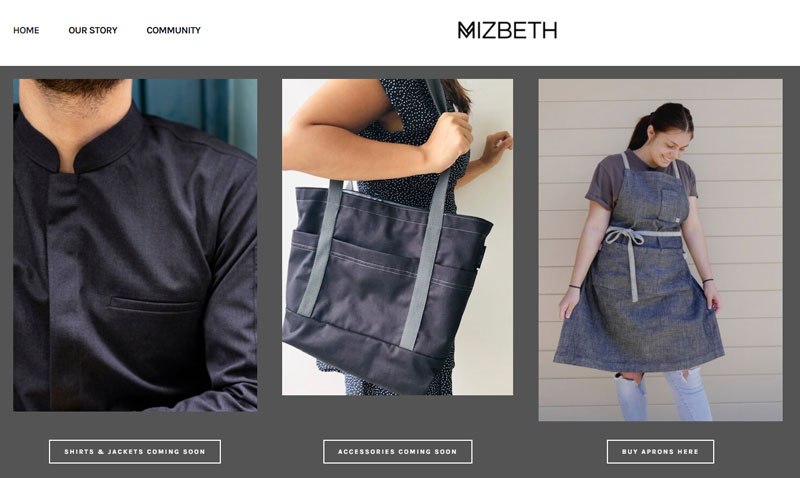 ​Manufacturing plants, hospitals & labs use MF to automate orders and manage their uniforms.

What to Do With Old Scrubs and Nurse Uniforms [Textile Recycling]